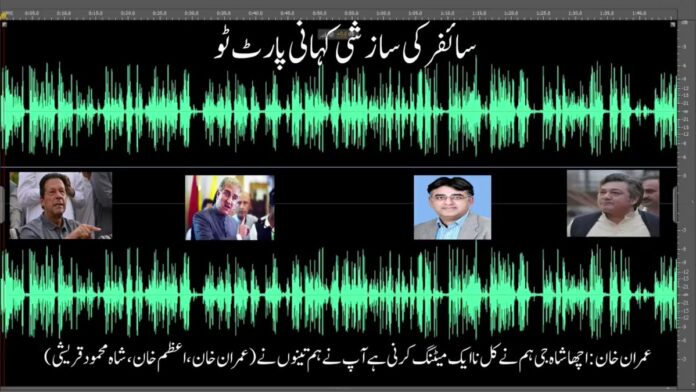 Another link of the video is circulating on the internet regarding a conversation between former PM Imran Khan and Azam Khan. It was heard in audio that PM Imran Khan said to the then secretary Azam Khan to “play” with the US cypher controversy. As per Khan, his government has been removed by the US regime change operation.

In the audio Imran Khan, Asad Umar, Shah Mahmood, and Azam Khan can be heard.

The following is the conversation of the audio that says:

Imran Khan to Shah Mahmood: We have to hold a meeting tomorrow accompanied by the foreign secretary. And in the meeting, we will tell him to write the minutes said Azam Khan, and to Photostat them.

Azam Khan: This cypher came on the 8th or 9th.

Imran Khan: The meeting was on the 7th. We do not have to take Americans’ names under any condition. Nobody should name the country. From which the country the letter came, I don’t want to hear it at all.

Asad Umar: It is not a letter it is a transcript of the meeting.

Imran Khan: It’s the same whether a transcript or letter. The public will not understand what transcript is. Do say this in your Jalsa.