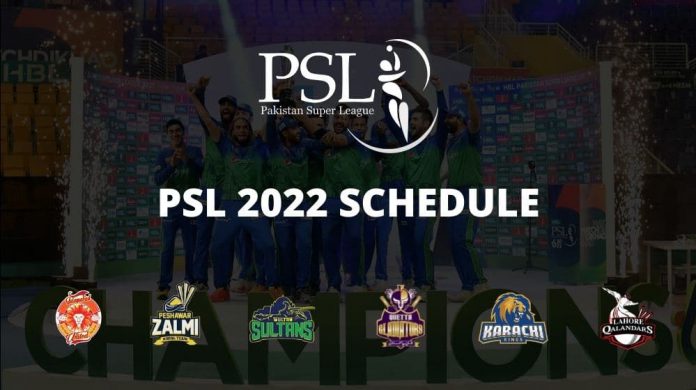 According to the official PSL 2022 schedule, all Matches of Pakistan Super League 7 will be held in Pakistan in Karachi and Lahore. The latest edition of PSL is kicking off on January 27, 2022, in Karachi. Karachi Kings, Lahore Qalandars, Islamabad United, Peshawar Zalmi, Quetta Gladiators, and Multan Sultans will be the six teams vying for the title this season.

All matches will be played in Pakistan. The National Stadium Karachi and Gaddafi Stadium Lahore will be open to the public with strict Covid-19 precautionary measures. The opening ceremony will be in Karachi on the debut match in National Stadium. Karachi Kings will face Multan Sultans in the first match of the Pakistan Super League 2022.

You can check the PSL 7 Schedule here:

The season, like previous ones, will keep cricket fans all over the world on their toes. Apart from Pakistani cricketers, famed international players will also be playing alongside all teams. The transfer and retention window is now officially open and will close on December 10th, following the finalization of player categories.

Viewers will get to see their favorite players in action, giving exciting performances and putting on a good show. The format of PSL 2022 will be the same as the previous ones. The tournament will be a double round-robin format, with each team facing each other twice in the first round. However, when the first round concludes, the top four teams will advance to the play-off round.

The PSL 7 will be begin from January 27 and end on February 27. Karachi will be hosting 15 matches in the first leg and Lahore hosting the remaining 19 matches. Additionally, the PSL 7 Draft for the 2022 tournament will occur on Sunday, December 12 at 3 PM at the High-Performance Centre in Lahore.