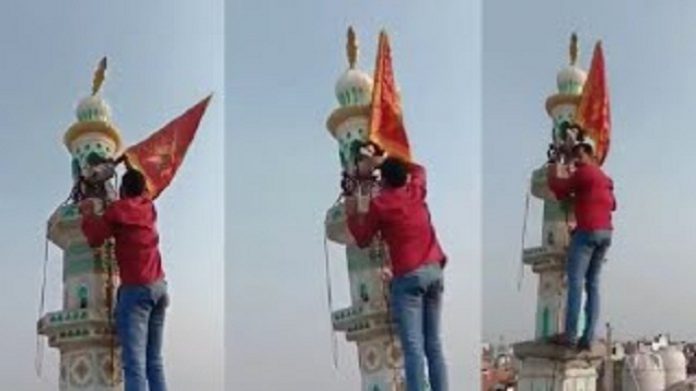 The social media admired Hindu man after his video gone viral in which he was removing the saffron flag from the minaret of a mosque in New Delhi.

The original video was shared by the Arab academic and author Khaled Beydoun on Twitter.

The flag had been placed by the anti-Muslim rioters on minaret of a mosque in Delhi last week.

An anti-Muslim massacre wherein 42 people were put to death and hundreds progressively harmed denoted the most noticeably terrible mutual viciousness in Delhi in decades.

A man can hear saying in a video that “This is a young man, our Hindu brother, who is a very nice man, taking down the flag placed on top of the mosque. This is a very good thing. The atmosphere here, when we came here, is peaceful. The neighbors have welcomed the Muslims”

The person further added that “Today, the flag that was placed on the mosque that day is being taken down. And Ravi is spreading the message of love and peace.”

The narrator further said that “All the young men here have supported the Muslim community that left the area during the riots to return to their homes. They have promised to live with them in peace with love like they have been living for so many years before the disturbance.”

An earlier video was shared on the internet in which it is easily noticeable that a mob parade around the on fire mosque in the Ashok Nagar and placed the same saffron flag on the mosque.

After the violence was triggered in the capital city of India many mosques were burned during the anti-Muslim riots.